Word on the Wire

There is nothing like preparing to move house for uncovering bookish treasures. Next comes the big question: will they stay or will they go?  Mostly they stay for one very simple reason: a bit like Desert Island Discs, books map landmarks in one’s life. I can often pick up a novel and think, blimey, I know exactly where I read that. I thought it might be fun to share some teen and adult ‘bookish’ memories and then I thought, wait a minute, how interesting would that actually be? On a par with dreams, tastes in literature are fairly subjective and, more importantly, horribly revealing. Do I ‘fess up to reading certain novels and run the risk of alienating potential readers?   Worse, do I fess up to not reading certain novels, that other writers/publishers/agent might expect me to have read? See, what I mean? It’s a minefield.

Of course, I could play safe and give you a bit of a steer without being too specific. I sort of went down this route but, as it read like a catalogue in an auction house, I thought I’d do you a favour and spare you. Anyway, I have the perfect excuse: we move house tomorrow and I’ll be off air for a couple of weeks. Until then, happy reading…

No, I didn’t get drunk last night but I did spend my evening tearing through Stephen Leather’s ‘Black Ops.’ To put this in context, I posted a tweet about a week or so ago mentioning that I’d just raced through a 130 pages of a novel in a sitting. Then real life intervened and I wound up reading ‘Black Ops’ in fits and starts – never a good way to read a book – which always makes me feel faintly guilty on behalf of the writer. Anyway, I put things straight last night by saving the final furlong for a thumping good read.

Part of the Spider Shepherd series, Spider is given one of his most testing missions to date: to spy on his boss, Charlie Button, who it’s feared has gone rogue. Things aren’t much better on the personal front when Spider’s sixteen year-old son is caught with drugs.  To ‘get him off’ a custodial sentence, Spider is forced to unmask a dealer for the police. Oh, and did I mention the grieving father who holds Putin responsible for the downed Malaysian plane over Ukraine? Well, Spider is tasked to prevent the assassination of the foreign head of state on UK territory. Throw in an assassin or two and a couple of Real IRA terrorists, and you get the picture: it’s a rollercoaster of thrills, surprises, double dealing and real politic. Only a writer of Leather’s calibre can juggle so many plot lines without confusion and dropping pace. For me, what also sets him aside is his amazing topicality. He really is ‘on the button’ and I can only dare to imagine from where he gets his information. Either that or the guy has a crystal ball. A couple of times I closed the book (briefly, you understand) muttered the equivalent of ‘Crikey’, thought about what I’d just read in black and white, told myself it was fiction, wasn’t it? And, dazed, read on. I love it when a writer does this. Leather makes you think. He challenges what often is taken for granted when it comes to the ‘powers that be’. Whether they are police, spooks or politicians, even our hero, nobody emerges without dirt on their hands. If you want a cosy, rosy-tinted view of the world with good guys and bad guys, forget it, but for realism, insight and sheer blood and guts, it doesn’t get much better than this.

‘Black Ops’ is published by Hodder and Stoughton.

A TALE OF TED BY LOTTIE PRENTICE

I have a lot of books. When I say ‘a lot’ there are thirty novels waiting to be read on my bedside bookcase. My study/bedroom has three large bookcases crammed with my favourite writers. Downstairs there are more. And did I mention the attic and my stepmother’s garage, both housing books, some of which I bought for my children when they were little? I’m not a hoarder by nature. ‘Chuck it out’ is my motto, but I have a pathological blind spot when it comes to films and novels. When I announced to our estate agent recently that we’d found a house after a long search his first question was: ‘Is it big enough for all your books?’ You get the picture. This leads me in a circuitous way to the boxes of children’s stories I haven’t clapped eyes on for the past few years and which hold a special place in my heart. Who can fail to melt as a child, wide-eyed and captivated, listens to his or her favourite tale? And now my children are having children, what better time to rummage through the all time favourites as I move them from one house to another? Fortuitously and by sheer happenstance, ‘A Tale of Ted’ by Lottie Prentice popped through my letterbox in the midst of my nostalgic trip down memory lane.

Now I’ll be straight: for a debut author to garner fulsome praise from celebrities and established writers is a rarity. But Lottie Prentice is no ordinary novice writer. She’s a former three-day event rider and member of the British Equestrian Team. She knows her stuff. Did I expect authenticity? Absolutely. Did I expect great storytelling? I was dubious.

In fact and happily, it’s a great little story. Ted is a very naughty horse, indeed, with a tendency to bite the farrier, terrify the vet and chuck off his brand new rug.  How well I remember ‘Stella’, my own horse when I was a teenager, who had similar, if slightly more dangerous, inclinations.

As we all know, children love characters with an impish disposition and with whom they can empathise so Ted certainly fits the bill. Wayward and ‘his own horse’ best sums him up.

Aimed at under seven year-olds, occasionally, the language seemed a little advanced but this was more than compensated for by the rhythmic prose and gorgeously illustrated text by Lorna Gray. With other characters, like Rhino the Jack Russell and Barney the Owl, Ted seems set to embark on another adventure or two. I do hope so. 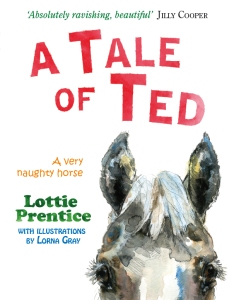 ‘A Tale of Ted’ by Lottie Prentice is published by Crumps Barn Studio and available at the fantastic price of £6.99