Word on the Wire

REASONS TO BE CHEERFUL

January proved to be such a brutal month for many and, with continued restrictions, I wasn’t much in the mood for writing a blog post, but time moves on and I thought I’d share a few reasons to be cheerful in February.

Obtaining agent representation is harder than ever but three authors, who I worked with on their stories, have defied the odds and done just that. In no particular order, Daniel Scanlan is now represented by Ian Drury at Sheil Land Associates, Rob Burnett is represented by Jemima Forrester at David Higham Associates and Charlotte Owen is represented by Nicola Barr at The Bent Agency. Congratulations to all and best of luck with their books and careers.

Over Christmas – seems so long ago – I finally read ‘The Salt Path’ by Raynor Winn. As I’ve often said I tend to read best sellers long after the hype has died down. In this instance I wished I hadn’t waited so long. A true story, utterly inspirational, and a massive testament to fortitude in adversity, it proved the perfect read for our time. It’s grounding. It recognises the fragility of life. It also makes you realise that bad things do indeed happen to anyone and it isn’t wise to take what we have for granted. And yet, this is no misery memoir. It’s uplifting and life-affirming and one of those rare books I might well return to. But not before I plough through my ‘TBR’ pile, which has spectacularly increased after I took receipt of hardback versions of ‘The Burning Girls’ by CJ Tudor and ‘Slough House’ by Mick Herron a few days ago. Don Winslow’s, ‘The Force’ has also joined the ranks after my other half raved about it. An epic tale of corruption in the New York Police Department, with a highly morally ambiguous main protagonist, sounds just my bag. Can’t wait to dip in once I’ve finished Bill Bryson’s extraordinary ‘At Home.’ To describe and do it justice, I’m going to quote from the blurb: ‘What does history really consist of? Centuries of people quietly going about their daily business… And where do all these normal activities take place? At home.’ It’s a history of private life, of invention, of habit and convention. While it’s not so laugh out loud funny as his other works, it’s no less entertaining. The sheer volume of information and fascinating detail is astonishing. Bryson’s true talent is his ability to unearth and flag up the endeavours of the ‘little people,’ those inventive souls who failed to be recognised for their achievements in the age in which they lived, often through some quirk of history or humanity. His love of language is a joy for a wordsmith. Who knew that, for example, that the word ‘bedroom’ was first used by Shakespeare in ‘A Midsummer Night’s Dream,’ or that the word ‘Buttery,’ a room in a grand house, has nothing to do with ‘butter’ but ‘butts’ as in butts of ale? I love this kind of minutiae.

On the literary front, ‘SIX’ will be published on March 4th as trade paperback and digital, the mass-market paperback released in August. The story begins when successful criminal defence lawyer, Jon Shaw, comes face to face with, Danny Hallam, the man he tried to murder twenty-five years ago. To find out why, how and what, you’ll need to grab a copy!

Meanwhile, Apple audio has released ‘A Deadly Trade’ and ‘Final Target’ with Ben Onwukwe’s deliciously deadly voice capturing Hex perfectly. For those unfamiliar with Hex, he’s a hitman turned good guy who, in ‘A Deadly Trade’ becomes embroiled in uncovering a criminal conspiracy involving biological weapons. In short, it’s a tale of espionage meets action adventure. In ‘Final Target,’ Hex discovers that the past is not so easily left behind and is quickly pulled back into the game by glamorous, MI5 intelligence officer, Inger McCallen, with an operation in Berlin. It contains all the typical Hex trademarks: high body count, intrigue, and highly intelligent women.

I need no excuse to binge-watch, but the pandemic has made my love affair with the small screen more respectable. How I missed ‘The Americans’ when it first came out, I have absolutely no idea. A spy thriller set in 1980’s America, it follows the story of Elizabeth and Philip Jennings, two KGB deep cover intelligence officers, played by Keri Russell and Matthew Rhys, who pose as an all American couple. Both sides of the spy divide are brilliantly explored when an FBI agent, Stan Beeman, specialising in counter-terrorism, moves in opposite (played by Noah Emmerich). Characterisation is superb, surpassed only by the acting. Frank Langella puts in a compelling performance as ‘Gabriel’, the Jennings’s handler. Plot lines are authentic and dramatic. Again, it’s a series I may well return to at a later date.

I have a small number of CD’s bought from buskers around the country. A few years ago we were passing through Chester. Walking down the main drag, the haunting sounds of a violinst playing ‘Schindler’s List’ stopped us dead. We were not alone. Quite a number of people had stopped to listen to what turned out to be a sublime set of film scores. The man playing was none other than Phillip Chidell, a highly regarded musician and one time child prodigy, although we didn’t know it at the time. For some reason our CD was added to our collection but never opened until this Christmas when we were hunting around for something a little different to play. And what a treat. Production values are superb – not something that can always be said when you buy work ‘off the pavement’. If you love film music or you simply love to hear a musician playing at the top of his game, go out and buy. Shakespeare had a point when he said that ‘If music be the food of love, play on.’

Lastly, and continuing with a music theme, remember Conchita Wurst – and her Eurovision Song Entry, ‘Rise Like A Phoenix?’ Well, I was given the sheet piano music for the song at Christmas. For those who don’t know it it’s a big gutsy power piece about hope and optimism. If I’m feeling glum, I take to the keys and belt it out. If not cheerful before, I certainly am after.

A few weeks ago, I received a review copy of ‘Boy, Interrupted’ by Dale Hibbert, a former member of The Smiths.

Manchester born and bred, Hibbert paints a fascinating picture of the music scene back in the late 1970’s, faithfully describing the way in which musicians connected, created bands and, as easily, how those bands fractured. He charts the rise of Joy Division and the Buzzcocks as well as many others in a Who’s Who of rising musicians at the time. Of interest to fans, I’m certain, but does the memoir hold wider appeal for curious readers?

Hibbert’s mother died when he was only eight days old. This tragic fact is revealed in the first pack-a-punch line.   As one might expect, his sense of abandonment and strong feelings of being an outsider dogged his life.  Compounded by his father’s less than hands-on approach to his only son – Hibbert spent much of his formative years living with his grandmother – those feelings were exacerbated and turned him into a loner with few friends. It’s exactly from these experiences that the seeds of his undoubted creativity were sown. All fair and good, yet Hibbert’s attitude to the main players in his life, especially his wives, makes for less than comfortable reading. He appears to hold a conviction that he has been done down and the tone is dangerously close to straying into self-pity. Don’t get me wrong, Hibbert, also diagnosed later with Asperger’s syndrome and diabetes, has had his fair share of serious problems with which to grapple. It’s fair to say that he was handed a duff hand of cards from the outset, but one might be fooled into believing that the memoir is more ‘misery’ than ‘music scene.’   And that’s a pity because, as soon as Hibbert talks about his bent for music, his passion for bass and melody, and the essential dynamics necessary to create a successful band, the narrative takes off. This is what kept me flicking those pages.

Everyone of Hibbert’s generation, it seems, was either in a band or on the cusp of joining one. He reveals how the Manchester Musicians Collective came into being and how even the most unrehearsed groups were warmly received – a far cry from today’s gladiatorial approach.

The core of his story is devoted to his time with The Smiths, and his introduction via Johnny Marr to one Steven Patrick Morrissey, the enigmatic front man of The Smiths, later known solely by his surname.   Hibbert paints a genuinely interesting picture of himself and Morrissey as two young men deeply suspicious of each other. Hibbert’s scything opinion and keen nose for sniffing out pretentiousness doesn’t spare the man who later became so successful, yet Hibbert is also incredibly fair-minded. He observes the perfect alchemy that existed between Marr and Morrissey.   He praises their talent as songwriters and it comes across as absolutely genuine and without a shred of envy.

Hibbert’s own expertise lay in his very singular skill as a studio engineer. In this regard, the confines of the studio were a perfect match for his ‘loner’ nature. Other writers might be tempted to become overly technical when describing how sound is laid down, but Hibbert avoids this, illustrating the process with verve. Quick to spot that the Smiths didn’t fit into a particular genre, he was keen to capitalise on and turn their uniqueness to advantage.

Unsurprisingly, given the speed with which band members split up and moved around, Hibbert’s inclusion in the group was always going to have a ‘sell by’ date. He alludes to the fact that, with the stratospheric success of The Smiths, all kinds of third parties popped out of the woodwork.   After a key gig at The Ritz where they played support group to Blue Rondo a la Turk. Marr, Hibbert’s friend, delivered the bad news in little over ninety seconds. In contrast to how Hibbert reacted to more personal partings, Hibbert’s response was stoic and dignified. Worse was to follow when, during a holiday shortly afterwards, he was replaced in his role as studio engineer. This opened up a whole new chapter for him personally and professionally and which, sadly, didn’t involve music for a considerable time. It’s an honest account, for sure, yet it would have benefited further if the emotional volume could have been turned down just a little. 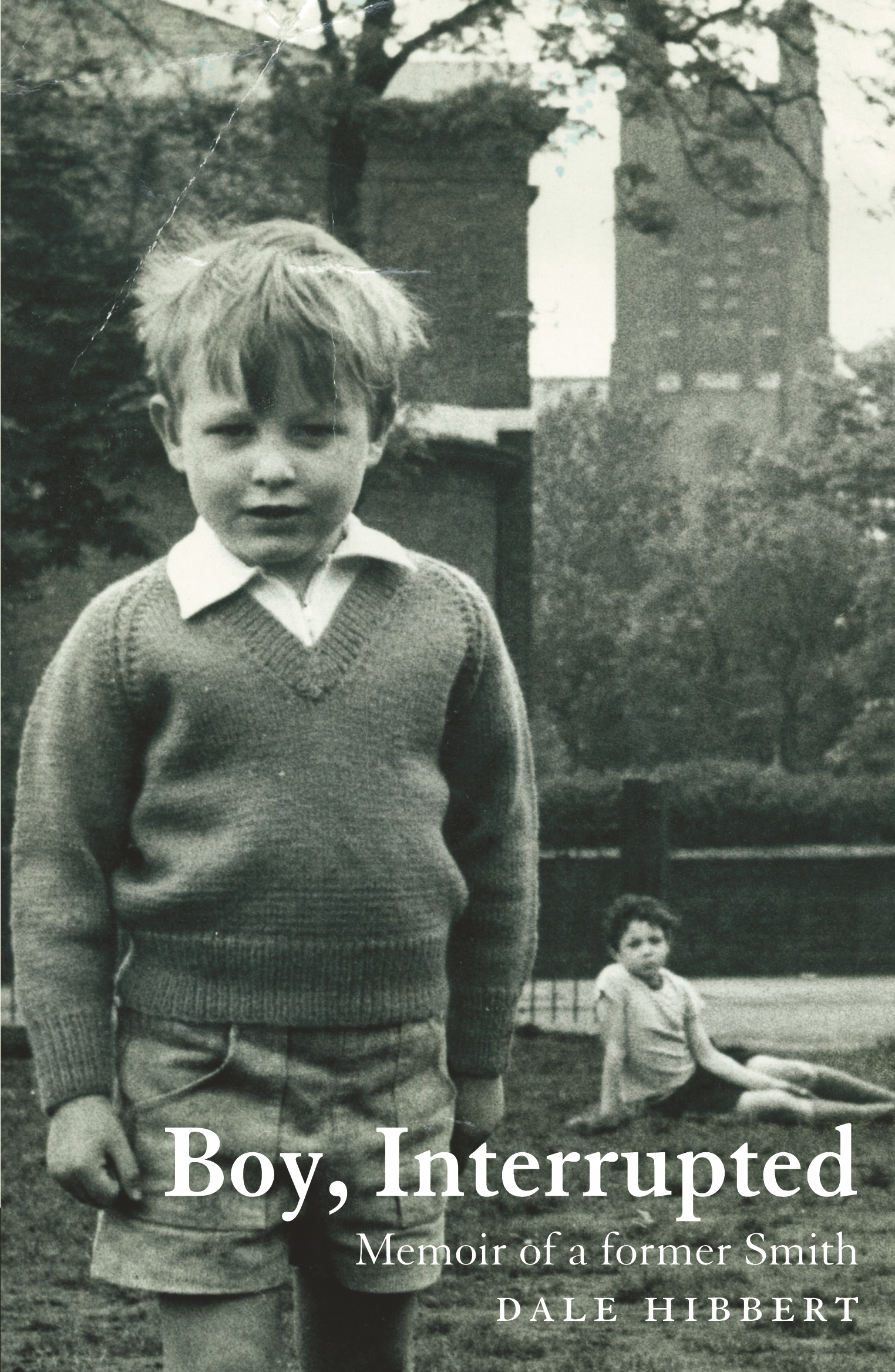 ‘Boy, Interrupted’ is published by Pomona.